Dennis Lancet UF chassis number 160LU2 started life with Hutching & Cornelius in South Petherton, Somerset. The H&C fleet had favoured Dennis since the thirties. The first three UFs with Strachan bodies arrived in 1954. YYB 118 was the middle of another batch of three in August 1957 when the firm switched to Harrington bodies. Harringtons were subsequently used for one more UF in December 1958 and similar bodies on AEC Reliance thereafter. One of the earlier Lancet buses became a spares donor for the fleet which had a relatively long service compared with other vehicles. Apparently   YYB 118 was the last UF remaining in service on withdrawal in September 1974. It then passed to Tor Coaches of Street, where it was painted dark blue and jade green. However, their ownership was short lived and they ran it for only a couple of months before exchanging it for a Bedford VAL at Brutonian Coaches. Fortunately for Brutonian, dark blue was also part of their colour scheme and it appears to have been a rolling "paint job" as the green was only gradually replaced by cream. Incidentally, Brutonian took on some of the old H&C routes on the closure of that firm, so it is possible that in its entire life YYB 118 never strayed very far from the beaten path. It was finally withdrawn in October 1976 when the "ticket" ran out and Brutonian did not think it worth trying to get it recertified. Fortunately they were one of those operators who let old vehicles linger at the back of the yard before deciding to scrap them and for YYB 118 preservation beckoned before this could happen.

The body on YYB 118 is Harrington's effort at an underfloor engine, single deck bus design acceptable to BET companies. The first eleven buses in this style had been built as Harrington Contender integrals for Maidstone & District at the end of 1955 and although records are not complete, it looks like H&C could have placed the first order for the body to be supplied on a separate chassis. Clearly, in selecting coachwork, H&C concentrated on the practical rather than the aesthetic, which perhaps makes the choice of the rather exotic Dennis chassis a bit of a surprise. The appearance of the H&C body is extremely plain. There is only one chrome framed windscreen (opening, as required by law at the time) and the near side screen is simply rubber mounted, looking as if H&C could not afford two proper screens (which may have been the case). Though specially made for each vehicle, the screens are the same "standard" size as the M&D Contenders, so making up the vehicle height as a result of the Lancet's low driving position has resulted in a deep blank area above the screens. Exterior bright trim is limited only to a strip which covers a body seam below the windows. The usual "bumper" and edging strip around the wheel arches are noticeably absent. Built at the same time, PHR 829, the same style body on a Leyland chassis was delivered to Silver Star of Salisbury and had the more typical "bells & whistles" - a full set of framed windows and trim plus chromed air louvres in the front panel. Perhaps H&C were not so daft though, anticipating panel damage on the narrow West Country roads. Alternatively, they spent so much on the chassis, the body was made down to a price. It has been suggested that the seating was subject to a grant. The first bus, YYB 117 had full coach seats, the remaining two being "semi", which to me look like a sort of double version of the driver's seat found in most other Harrington coaches of the time. I wonder if somebody can enlighten me as to the cost of a Lancet UF compared with other contemporary chassis? Although Dennis made great store of the dropped front frame, this seems to be studiously ignored by Harrington. The entrance has two steps of 11 inches to a floor level that concedes only a rise of 3 inches by sloping to the first passenger seats. By looking underneath one can see that the steps are completely independent of the drop frame which looks rather superfluous on the near side. It may well be that frankly, the length of the front dropped frame is not very useful unless a multitude of steps are used. For some reason, Harrington were very keen on the idea of a "flat floor" in their coachwork, in some cases even trying to eliminate intrusion from the wheel arch. In the case of this chassis one small step up to saloon level could have allowed shallower entrance steps, but it was not to be - you have to be fit to ride this bus. Furthermore, as a result of all this, the driver climbs down into his driving seat having come all the way up from the entrance doors. No cab door was fitted.

By 1981 the bus had been withdrawn and sold for preservation to an enthusiast in the Slough area. Although the window rubbers were changed, full restoration was not completed and the bus was stored outside, un-used, until 2004 when it joined the TH Collection.

This is an extract from an article that originally appeared in the newsletter of the Dennis Bus Owners Association. 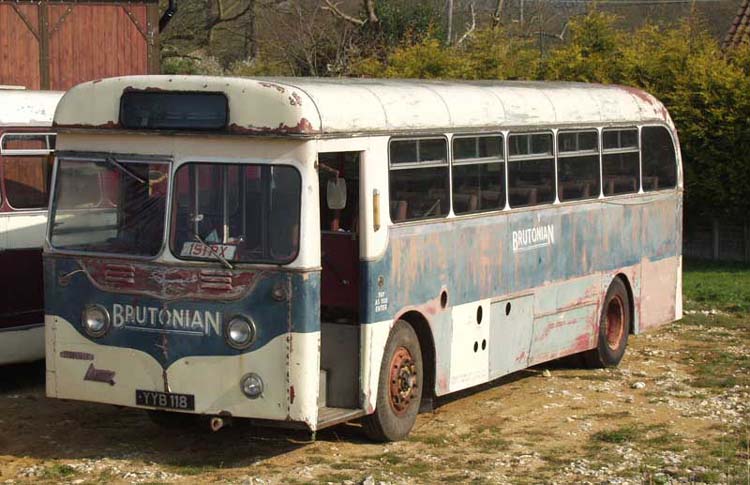