Harrington Coachworks closed in 1966, now quite a long time ago. Since this web site has been running I have been contacted by a number of ex-employees, some of whom worked only briefly at Sackville Works and some who for various reasons left the firm well before the end. On occasions I am contacted by family members attempting to compile their family tree and know only that a relative worked there but no other details. I am under no illusion that everybody who worked there thought it was a wonderful firm. Not un-naturally there could have been some bad feeling among those made redundant at the end of activities. Never the less, there are many who wish to be identified as connected in some way with Harrington Coachworks.

Not everybody was working there at the same time of course, so the chances that this page will definitely unite long lost friends are rather slim, but at the very least it is an attempt at a record of employees. I am aware that similar lists have been attempted but they were never gathered together for posterity and some lists have been lost altogether. If anybody objects to a name appearing, please let me know and I will remove it. Similarly, I will not under any circumstances divulge any addresses or contact details without permission. If contact details are known messages can be forwarded.

Before moving on to the main list, below is a photo of the team building the last Grenadier at Sackville Works in 1966. I have numbered the picture and some names have been associated with the faces. Memories being as they are, I had two names for some people and I have picked the most repeated answer. Can you add more? 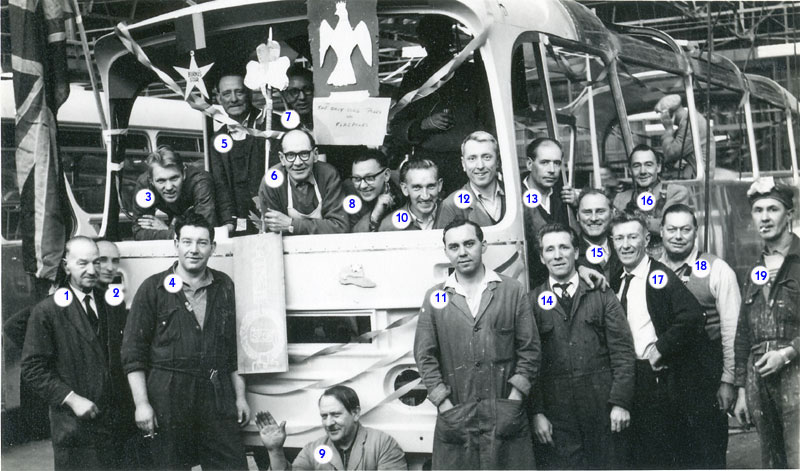 If you have contacted me before October 2008 and your name does not appear on the list, my apologies. I suffered a computer crash during the year and many emails, which I thought were backed up, were lost. Please contact me again.

Please E-mail me if you can add to the list.