Harrington had always been considered as a high quality manufacturer and they tended to target the high end of the market. This meant that their prime business was with the heavyweight chassis. Steadily improving chassis design before WWII combined with the wear and tear of the war years on coach work resulted in an early demand for new bodies to be fitted to pre-war vehicles. In the case of Maidstone & District, these originated in the early thirties and were fitted with dated looking bus bodies, but George Ewer started a rebody programme in 1947 with chassis that were only ten years old.

Both AEC and Leyland had new (or perhaps best described as latest versions) of chassis on offer. Initially the AEC Regal was more numerous and Harrington got off to a rather uninspired start with bus bodies on these. Later the Leyland PS1 production gathered pace. This was an even more substantial chassis than the pre war TS8 and the bodies fitted were equally sturdy. AEC and Leyland were certainly the main suppliers at this time but as the 1940s drew to a close a number of Daimler and Foden chassis were also bodied. 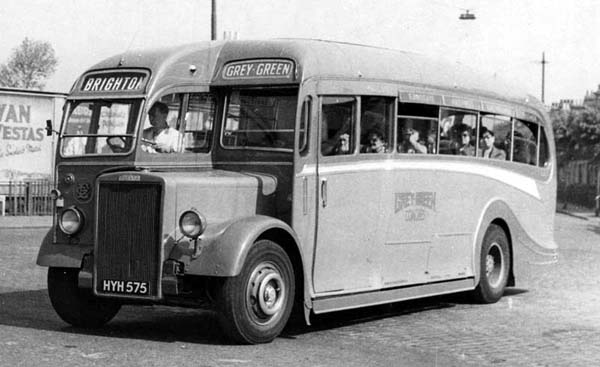 Pre-war bodies had not been numbered and numbering started in 1946. Until 1939 production had been less standardised, reflecting not only the number of chassis makes available but also the successive improved chassis types that were appearing in quick succession, such as the various verions of the Leyland Tiger. HYH 575 is typical of the immediate post war output for heavyweight chassis such as the Leyland PS1 or the AEC Regal. It was body number 19.

The general features of this design of body were to last until the last half cab was made in 1951. It was, of course, broadly similar to the half cab bodies produced before the war. The photograph clearly shows at least four points that are typical of Harrington coachwork at this time, and can be used as reference points for identification. Sometimes these were copied by other coachbuilders (Gurney Nutting in particular) but the copies rarely have them all together.

The first is the characteristic rain gutter over both destination displays. It has a slight outward turn at the bottom. Second is the small ventilator just above the cab side window. This has a sort of "half scoop" cover over the top half although sometimes in old age this was known to fall off. The small feature window in the panel ahead of the passenger door dated back to prewar styling and although not unique to Harrington, very few post war half cabs were produced without it. Finally, note the bright trim strips on the rear wing, which itself is notable because it does not go down to meet the bottom edge of the body, but joins with the rear bumper trim which was usually two bright sections high.

On the near-side of the coach the "grave-stone" shape of the fuel filler hole was also unique to Harrington, although this shape was only used on Leyland PS or AEC Regal chassis where the flip up quick fill lid was fitted. The light weight type of body such as fitted on the Commer Avenger, while apparently very similar to the heavyweights in side appearance had a round hole for access to the fuel filler. 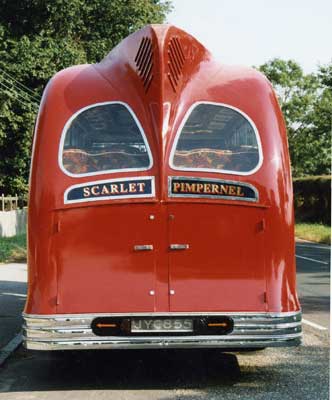 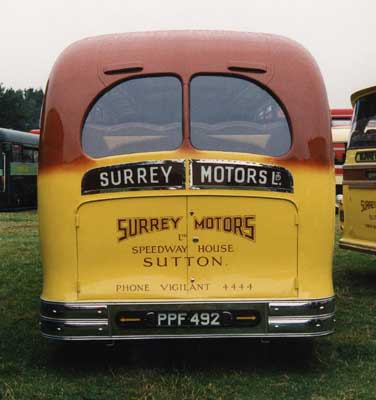 Two examples showing the kind of view to be had at the rear of a Harrington coach of the late nineteen forties or early fifties.

JYC 855 has the patent dorsal fin that had first appeared in 1935, although at that time it confined itself to the roof area and did not split the rear window. Although one of the early reasons given for the fin was that it enabled headroom at the rear of the coach, by the post war years the coaches were generally made higher anyway and this was not so important. However the ventilation louvres are visible and PPF 492 shows the alternative arrangement when the fin was not fitted.

The double height bumper trim is also clearly shown in these photographs. PPF 492 was a very late production half cab ( body no.859 built in 1951) and was built to the then newly allowable width of 8 feet. Never the less, it is interesting to compare the overall shape against that of JYC 855 (body 303 built in 1948). The general outline of the two has clearly altered in the time between their construction and this can mostly be ascribed to the bespoke method of building which allowed the panelbeaters (usually a team on each side, plus a front team and a back team) a chance to make slight variations with each vehicle.

The Half Cab Gives Way To The Full Front
The move from the "traditional" half cab appearance to a "full front" symmetrical appearance is a subject that cannot be laid at the door of any one particular coach builder. Whereas the full front can be described as much cleaner looking and easier to streamline from the stylists point of view, it tended to be met with staunch rejection by vehicle operators who valued the easy access to the engine. Furthermore, the mechanical parts were buried inside the body, therefore oily mechanics had to push their way through the upholstery in the saloon. So strong were various deemed advantages that Leyland continued to offer a bus as a half cab chassis layout until 1967. The stylists however had pushed hard through the 1930s. Even London Transport (in the happy position of both designer and operator) had flirted with radical change with the short lived AEC Q type - one of the first designs to move the engine to a more accessible position as well. The foundations for the transition to full front styling was therefore laid in the thirties, delayed by war in the early forties and boosted by demand for vehicles in the latter half of the decade. 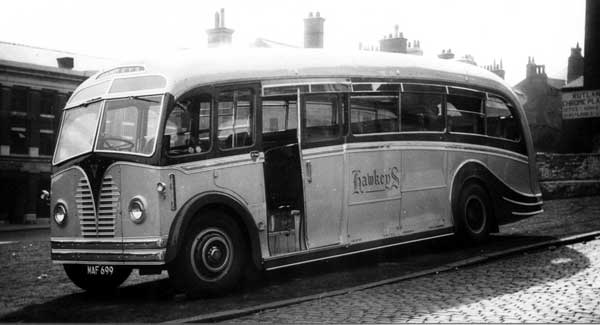 Through the forties and early fifties the half cab and full front style led an uneasy coexistence. Coaches became more and more luxurious and the difference between a bus and a coach, perhaps not easily evident in some of the designs of the twenties and thirties (that we might now describe as dual purpose) became even more divergent. Coaches were more readily accepted in versions other than half cab, perhaps due to continually changing fashion which did not affect buses in the same way. Finally, in the fifties it was a technical change that led to the emergence of the full front design as triumphant when in the search for maximum passenger capacity the designers moved the engine out of the way and under the floor.

Although generally speaking the Harrington motto might be that you could have any kind of body you wanted, the post war half cab coach settled down to a very consistent appearance. Some customers requested full fronted coach work, either new or more often as a replacement for a half cab. This in effect meant a mirror of the cab side and since there were no other changes to the body, from certain angles it is quite difficult to tell if a coach is full front or half cab. Hawkey's AEC Regal MAF 699, pictured above, was body number 810 and is a typical example; from the front wheels back it has no significant difference from a half cab body on this chassis. Usually the radiators were concealed and the full front bodies often had a large amount of flamboyant bright trim to make up for it! 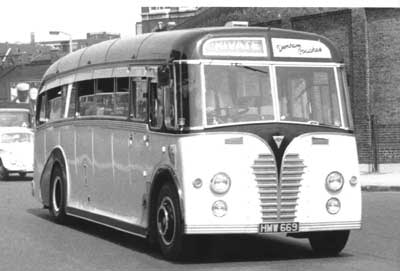 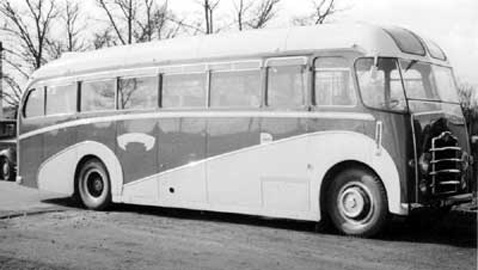 A completely new design, called The Wayfarer, was developed for the introduction of the under-floor chassis in 1950. At this point, features of the new style were incorporated into the full front bodies fitted to front engine chassis, which were still in production. The half cab however remained virtually unaltered from 1947 until the last in 1951.

HMW 669 above (left) is body number 1098 on an AEC Regal (the same type of chassis as MAF 699). It was built in 1952, a year after production of the "Wayfarer" had started. Changes included a revised style of rear wing and chrome framed front corner windows. On the whole it is probably a less harmonious design than the earlier coach. JP 6468 (above right) is even later. It is body number 1198 dating from 1953. It incorporates the rubber mounted corner window that had come into use on the Wayfarer by this time. Note also that the outward flair to the bottom of the side panels and the separate front wing section have gone. Demand for bodies in this style was small and by this date it was more frequently found on a rebodied chassis, such as the Leyland PS1 above - one of a number done for Smith's of Wigan.