The first numbered body from Sackville works in 1947 was a Commer Commando. This was a normal control chassis in competition with the Bedford OB. It was actually an export model and not nearly as shapely as the example pictured below on the left. Harrington bodied very few Bedford OB chassis, the market being pretty well sewn up by the Duple Vista. The Harrington body (below, right) unfortunately lacks the certain something that made the Vista body so popular, and was almost certainly more expensive. Note that the rear wings do not swoop down towards the back edge of the body. This was normal practice on most other Harrington designs but possibly was not done because that was a particular feature of the Duple body. 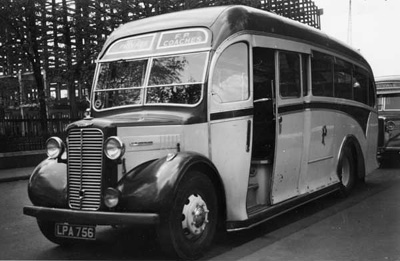 Demand for PSV chassis after the war had prompted smaller manufacturers such as Albion and Commer to look to the expanding market even though it would continue to be dominated by Bedford. One little "push" towards the shape of the future was that for example, both the Albion Victor and Commer Avenger were not "half cab" chassis and were only intended for bodying in the full front style. While Duple had a special relationship with Bedford, Harrington were Rootes Group sales agents and therefore able to get deliveries of the new Commer Avenger when it was released in 1948. 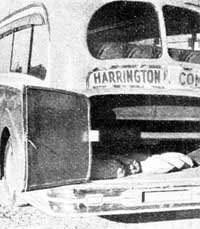 The first Commer Avenger chassis carried a Harrington body, number 404 and registered DTK 539. It is seen left, during the Commercial Motor road test with sand bags to simulate a load in the boot .

The Commer Avenger I had a powerful petrol engine and this rendered it still quite nimble when fitted with heavy wood framed Harrington coachwork. The Commer, based on the QX lorry design, was delivered with a large steel panel incorporating headlights and a grille that the coach builder had to integrate into the overall style of the coach. Possibly for warranty reasons most coachbuilders invariably worked around components already part of the chassis when it was delivered for bodying (for example the windscreen shape of a half cab Leyland PS1 coach differs from the similar AEC Regal. This is due to the shape of the dash panel supplied with the chassis). Compared with other offerings at this time the Commer body was only modestly decorated. The horizontal chrome grille slats would have come as part of the Rootes front panel, as would the pressed steel bumper. Note that by the early fifties the shape of the front destination display frame now matched the style of the rear illuminated panels. These were hand made at Sackville works and numbered for each vehicle. 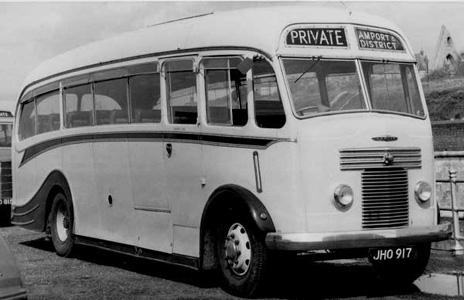 Above left, dating from 1950 is body number 796, on Commer Avenger chassis 23A0500. This kind of vehicle typically carried 32 people. If the dorsal fin option was not taken up then the rear window was divided by a thin vertical bar. For the Albion version of the same body the radiator was still on view, since it was a traditional cast aluminium item. KCD 697, chassis FT3AB 70790B carries body 663 and dates from November 1949. It is seen at auction in March 2002 when it changed hands for the first time in many years. More pictures of KCD 697 are linked from the preserved vehicle list. 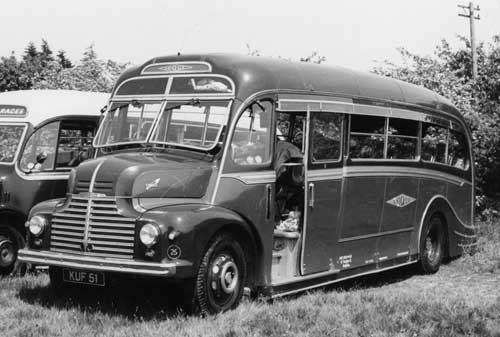 One other chassis type popular in the late1940s was the Leyland Comet, which was about as close as Leyland came to making a lightweight PSV chassis. Compared with other manufacturer's offerings it was heavy at over 3.5 tons. This made it over a ton heavier than the Bedford SB for example. It was available with either a diesel or petrol engine, the latter making it refined enough for coach work. It was only available in 7ft 6in width which made it popular with operators where narrower roads were common, particularly in the West Country. One example of this type is preserved.

KUF 51 pictured right was in the fleet of Unique of Brighton. I have never seen a picture of a Harrington bodied Comet without the destination arragement shown in the photograph - the two frames immediately above the windscreens are being used as windows.

The Bedford SB became available in 1950 and although the first Harrington body does not appear to have been until 1952, varying styles of coach work continued to be available on this chassis until the firm closed in 1966. Perhaps, as Rootes agents, Harrington did their best to convince their customers of the merits of the Commer chassis.

It appears that no SB chassis received the body style fitted to the early Commer Avengers as typified by JHO 917 above. Apart from the front, this had echoed the style of the contemporary half cab body. By the time orders were taken for Bedfords the Wayfarer body (for underfloor engine chassis) was about to start it's second generation. Therefore the Bedford's style tended to echo the Wayfarer shape. One of the most obvious advances was the one piece curved rubber mounted front corner windows. Once this was in production, the old style corner posts were never seen again. This is probably due to the increased strength of the aluminium framed body also introduced at this time.

Typical (if typical is the right word to use in view of the small number of examples) of slightly over the top bright trim decoration to be found on Harrington full front designs of the late forties and early fifties, is body number 1202, Bedford SB 16955 registration PYA 973 dating from May 1953. It had a smooth petrol engine, befitting a touring coach used by holiday makers. This was a top specification body supplied to another long time Harrington customer, Blue Motors of Porlock. It featured drop windows, deluxe trim options and a sliding sun roof, which by this date was becoming very rare.

Orange Luxury were part of the George Ewer Group who were attracted to the SB when the option of a diesel engine became available. It has rubber mounted side windows with top sliders for ventilation but half drop windows were still available as an option. One slightly unfortunate thing was that although the bodywork supplied by Bedfords was minimal with regard to external panelling, it did include the large aluminium panel in front of the radiator and the join in this can be seen curving up towards the Bedford badge - which is actually mounted on this panel. The row of air admission cooling slots were intended to be covered by Bedford chrome mouldings (as used by Duple for instance). However this does not sit well with Harrington's own grille design which would obviously look much neater without the top two slots.

Only a handful of Commer Avenger chassis appear to have been bodied in this style (essentially, Wayfarer Mk2). One of them was a demonstrator for the TS3 two stroke diesel engine, announced in May 1954. Details of this can be found elsewhere on this site.

Rarer than this would be anything in the Wayfarer Mk. 3 style of 1955 - I have never seen a photograph of one although a line drawing was used in advertising for the Commer Avenger. This may have been merely to show that a body of this type could be built on request. In reality Harrington had their hands full with the integral vehicle range at this time and large block orders for the Home Office and Maidstone & District .

Finally, what I believe to be the rarest of all the lightweights that actually did exist, - a body for the Commer Avenger chassis built to the appearance of the Wayfarer Mk 4 design. Two catalogues depicting versions of this body (differing in door and window detail) were issued for this style. As was usual at the time the graphics used in catalogues either completely avoided photographs or heavy re-touching was employed.

It seems very possible that body number 1910 of 1956 was to this design, although there is no photographic evidence to confirm the fact. It was registered TGU 447 on Commer Avenger T48A0076. It was new to the British Council, London.

Forward to the next stage: Harrington Crusader 1959