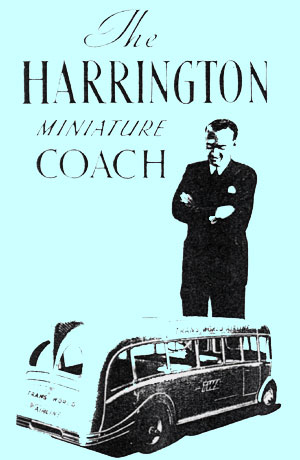 As a publicity exercise, this was probably one of Harrington's most successful. Although the idea of miniature motorised vehicles was not new or unique, by virtue of the readily identifiable dorsal fin fitted to some of them, almost any distant memory of a miniature coach also conjures up the name Harrington.

However the story actually starts in 1935 with Ernie Johnstone who lived in Brighton. Whether it was the influence of the nearby coach works at Hove, or the thousands of coaches that flocked to the South coast in Summer, who knows, but he hit upon the idea of small pedal powered buses which he hired out from a site on Madeira Drive. Quite remarkable really, to think of the holiday makers who had perhaps travelled all the way from London and then for entertainment jumped into a small replica of their journey. But this was in the days before the actual travelling involved with moving from A to B became tiresome. The early pedal powered eforts led to motorised chassis. Johnstone was a prolific builder of minatures, not only regularly replacing his own fleet and selling on the old ones but supplying new to other amusment parks including such favourite resorts as Morcambe and Margate.

Perhaps what made Johnstone's vehicles so pleasing was the uncanny accuracy with which he captured the "feel" of the style of vehicle even though they were quite clearly (and for practical reasons) not to accurate scale. Not all were Harrington outline of course; there were also very attractive models based on Duple and Yates coach work among others. In fact, for the purposes of "true" Harrington bodies, only 12 vehicles were actually bodied at the factory between 1949 and 1950 on chassis bought from Johnstone. Any others were Johnstone's own bodies, "in the style of Harrington" and therefore from the point of view of this web site are not included. However, so successful was the venture that Harrington continued to make model coaches available although these were the smaller un-motorised version. 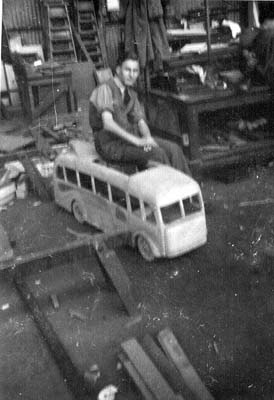 The types available were listed as follows:

"Type A. Harrington famous Dorsal Fin design, seating adult driver and two child passengers in front. Instead of a rear seat there is accommodation for light parcels and packages".

" Type B (without fin). Accommodates adult driver, two child passengers in front and in addition two children on the seat at rear".

"Type D. A smaller window Display Model, with fixed wheels and no transmission or motive power fitted with miniature seats".

Left: Geoff Greenow building a Type D in the Harrington factory. The front panel indicates it will represent a Commer.

The twelve motorised coaches are known by the fact that they were proper motorised vehicles and therefore required to carry a registration mark. They were just over eight feet long (2.46m) and 30 inches wide (0.76m). Powered by a Villiers 125 cc two stroke engine, they were capable of a maximum speed of 26mph although 15 was the suggested cruising speed. A fuel consumption of 100mpg was quoted. Pictured below at the Harrington factory, Ernie Johnstone and two lucky lads (might they be members of the Harrington family?) sit in a motorised coach, with the full sized version alongside. The Motorways Commer was particularly striking since it featured a metallic paint finish. The Miniature is in Trans-World Airlines livery and was destined to travel extensively for promotional purposes. 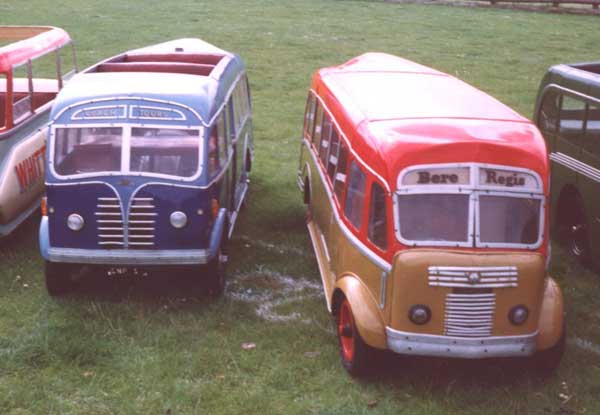 It is normally not the done thing to publish names in connection with preserved vehicles but under the circumstances that the most prolific collector of model buses, Geoff Price, has been several times featured in national newspapers there is hardly any point in avoiding it. Pictured right are two type A miniatures from Geoff's collection. Some five of the twelve genuine Harrington type A coaches made are in preservation.

Pictured below is an example of type B which can be found at the Rolvenden Motor Museum in Kent. 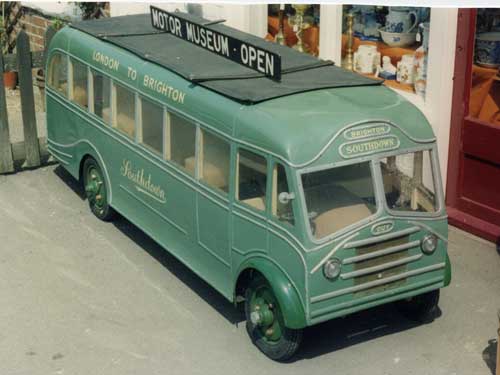 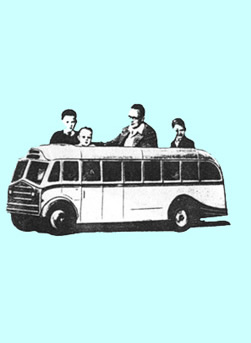 Not included in the production of twelve was the smaller Type C and D. How many of these were made (or survive) is unknown. Although the brochure seems to imply that the pedal version was as big as the petrol powered version, I believe that Type C and D were in fact the same size. In the case of the Type D, even though it was described as for static display (the wheels were made of wood) it was nearly five feet long and the whole structure was very sturdy. Like the larger version the frame was ash (with the general frame arrangement remarkably like the real thing) and the panelling was mostly aluminium. It is possible that production of the smaller models may have continued as late as 1952. 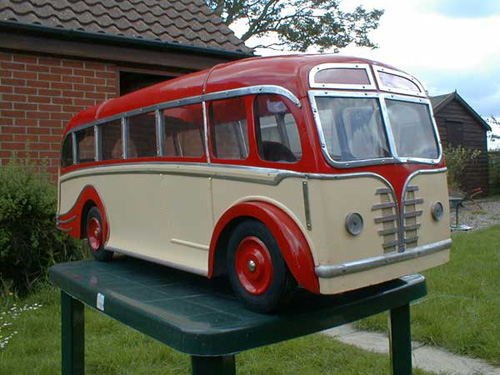 Pictured left is an example of a type D which is part of the Webmaster's collection. It was originally a window display model at Home James Coaches in Wavertree, Liverpool.