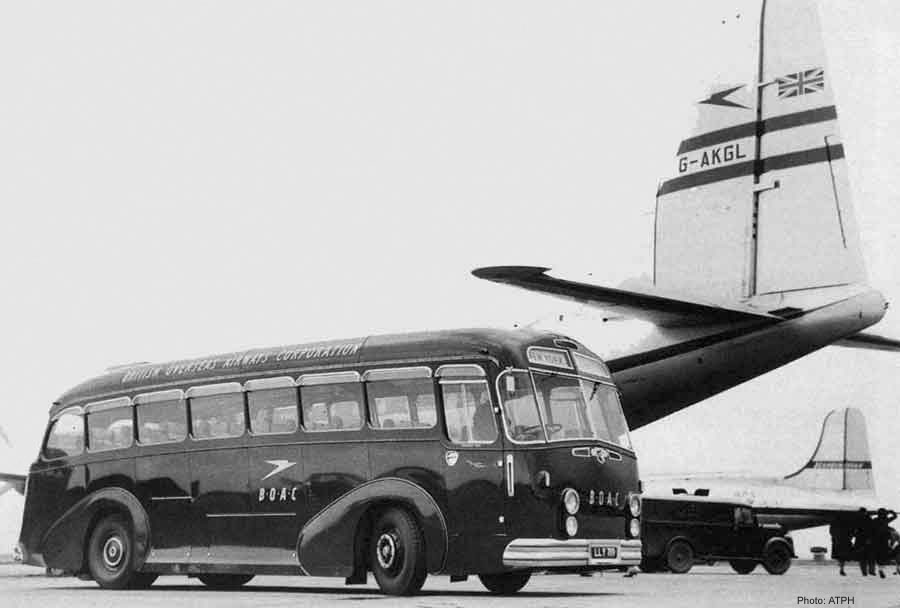 The entire coach industry was completely changed by the new generation of under-floor engine chassis introduced by both at the very beginning of the 1950s. Leyland and AEC were the to be the biggest producers and from the start showed serious commitment to developing their designs. Harrington produced a body specifically intended for this type of chassis and apart from a "family resemblance" it could not really be said that the new Wayfarer was a revision of an existing design. It was the first of Harringtons's designs to carry a name. Having decided upon the name "Wayfarer", it was applied to four revisions of the design, even though only the last two designs were radically different from the original.

Documentry evidence suggests that Harrington had originally intended to build two different types of Wayfarer, a type A and type C. Confusingly, the half cab body was still in full production and this was also known as Type A. As usual with Harrington, one gets the impression that strict designations were of secondary importance in a factory where parts pending assembly were frequently recognised by having the future operator's name pencilled on them.

Ordinarily, the fact that Harrington described two types would have simply meant with dorsal fin or without, but in the case of the new Wayfarer there were several other features that set them apart from each other. In the event, only one coach was built completely to the new Type A design. This was LLY 719, body number 835 mounted on a Leyland chassis PSU1/13 502742. It was displayed at the London Commercial Motor Show in November 1950. It was finished to a very high standard and included features above the basic specification, including a power sliding door. In fact it was destined to remain a one off limousine coach for British Overseas Airways Corporation - almost certainly intended to complement the new luxury Monarch service from London to New York which began on the on 1st March 1951. This used the Boeing 377 "Stratocruiser", which offered extraordinary comfort for the time including sleeper accommodation. This service carried the seriously rich and famous and was probably the first nail in the coffin of the Trans-Atlantic passenger ship. The significance of the coach is that at this time there was no terminal at London Airport. Indeed, aeroplanes took off from a variety of places. Passengers would make their way to the BOAC offices in the centre of London and embarkation was considered to have started at this point, including the coach trip to the appropriate airfield. The coach would often drive straight out to the aircraft steps. It was not at all unreasonable that BOAC's coaches made their way through London traffic with destination displays proudly set for Johannesburg, New York or Tokyo.

The next body built, number 836, was also basically a type "A", but was not quite a "pure" build since it had type "C" side windows. This time the chassis was an AEC Regal IV (9821E167). This was destined for another good Harrington customer, Hawkey's of Newquay and was to be registered NCV 50. In deepest Cornwall, it seems to have mostly escaped the glare of publicity and is rarely found in photographs.

Since only two of the type "A" were built (and on different chassis to boot) it is quite difficult to compare these with later production and describe what made them so significantly different from the Type "C". Certainly the difference is more than cosmetic. The type "A" had a pronounced slope to the rear panels and there was a shelf like ledge across the back waist below the rear windows. This can just about be seen in the photo of LLY 719 above. The bottom of the fin ended on the ledge. The frame arrangement for the rest of the coach. Although the overhang ahead of the front axle looks to be the same of the coach

This too had a pronounced slope to the Quite why LLY 719 was built so differently from other Wayfarers is difficult to say, for it is clear that it was not built significantly ahead of the other first examples of the style. By reason of its differences it will not be examined in detail here (although may feature on another part of the site). However it is worth mentioning some of the general aspects of the Wayfarer design that appeared right from the start. The mark 1 Wayfarer was similar in construction to the traditional half cab coaches which still continued to be available. The frame was constructed in wood and the interior featured a rising floor-line towards the rear of the coach. In addition there was a small step of a couple of inches to the seats from the centre gangway. The rising seats idea dated back to the days of the charabanc and allowed passengers a view over the passengers in front. All featured the standard large opening roof panel.

Harrington took advantage of the fact that the Leyland and AEC chassis were substantially constructed. The bodies were built with little thought for weight saving and this resulted in particularly sumptuous interiors easily matching the average limousine car. Although the under-floor configuration allowed as many as 41 seats to be fitted, many touring coaches were built with a little as 26. The unladen weight was invariably greater than a large double deck bus. 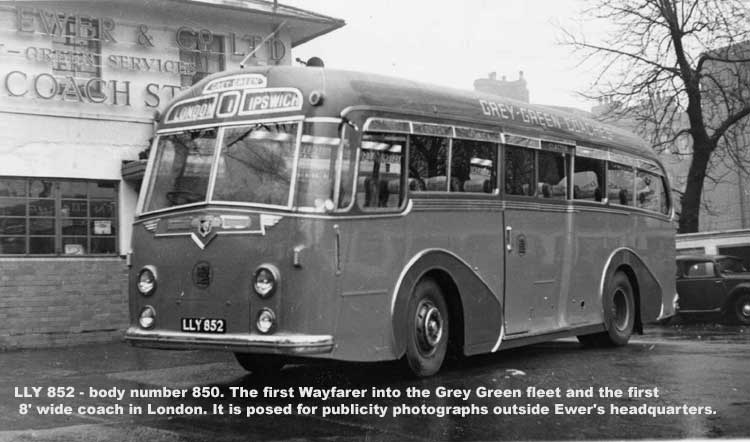 One of the most obvious new features was the use of curved toughened glass for the front corner windscreens. Together with the two main windscreens screens the "four panes across" set a future trend for almost all Harrington bodies for the next ten years. At the back it was a similar story, where corner glass was an option when the fin was fitted. The fin did tend to make the interior of the coach dark (though some in the back seat might say, "cosy") and the corner windows certainly let in a more light. However it required the two main rear windows to be a different shape and the overall effect was less harmonious with the curves of the rear dome. The rear corner window was an option which was seldom taken up. 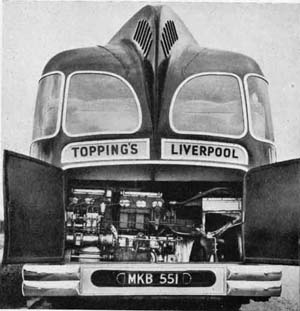 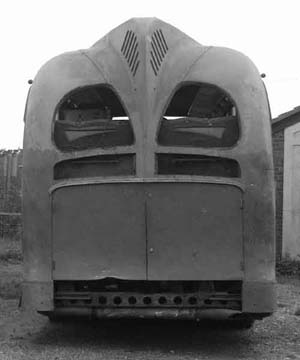 The Wayfarer also abandoned the rear wing which swept down to join with the rear bumper trim. Instead there was a re-appearance of the egg shaped wings, first seen on the so called torpedo bodies, produced just prior to WWII. Of course, before the introduction of the under floor chassis, the front wings had usually been supplied by the chassis manufacturers. Now the only supplied part was the inner wing and coachbuilders had to come up with their own ideas for finishing around the front wheel arch. Harrington chose to use the same shape at the front and the back. Although not really a problem for Harrington's skilled craftsmen, there is no doubt that this must have added to the time and cost in the production of these bodies. On the old body designs the rear wings had always been separate. Furthermore the outer mudguards had been subtly shaped all along the flange where they were screwed to the body (Duple's "A" type for example just used a flat panel) and this now had to be repeated on the front wings also. The wings then had to be shaped to suit the curve to the bottom edge of the body which was was flared outwards. In this Harrington really had no choice- it was a required fashion used by many other coachbuilders, even though it dated back to the twenties. The overall effect of the wings was very neat but was a mass of work. 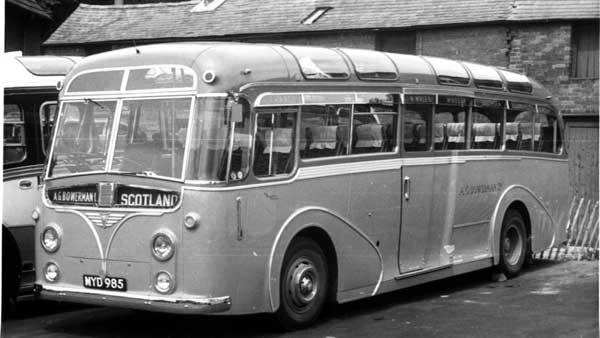 Another feature that made a return from the pre war years was the use of a stepped waist rail, but now it was moved all the way to the front and was used on the first bay of the side windows. It is satisfying to think that this styling device, closely associated (although not unique) to Harrington was still used, successfully, on the Grenadier. It is interesting to note that on the Grenadier that particular window tended to be where the body length was varied as required and on the Wayfarer the height of the window changed slightly according to the chassis make.

Survivors from the first generation under floor engine coaches from any builder are not exactly common. Most coach builders nailed their colours to the mast and incorporated styling features that were either controversial or dated very quickly and therefore hastened the end of the vehicle when a new model came along. The Wayfarer 1 was only really suited to heavyweight chassis such as the Leyland Royal Tiger and AEC Regal IV and these had a relatively short production run before weight and fuel economy became an issue. Although not at all common the Wayfarer style could also be ordered on a lightweight chassis (Commer or Bedford) if required. There are only three survivors of the Wayfarer 1 body and in fact, none of these are truly representational.

The first often causes argument as to whether it is really a proper coach at all, since it was never used for carrying passengers. The well known Knightrider limousine coach for M&D is body number 885 and is mounted on a Commer front engine chassis. However, apart from the special seating, the body is almost pure Wayfarer and anyone viewing this special order vehicle these days is apt to misunderstand that in fact all the early Wayfarers were pretty much finished to this standard (apart from the seats).

Body number 921 is mounted on the rare Foden PVR chassis and has considerably revised locker space to account for the engine which occupies the boot space. The body is taller than would have been found on the majority of Wayfarers. Finally, body 1085 was built for Southdown who as usual specified non standard construction and trim intended to make a mixed fleet of Harrington and Duple bodies look vaguely similar. Both of these vehicles require restoration.