As was explained in the general introduction for the Wayfarer, the Mk 2 designation was not used by the Factory and has really only been coined by enthusiasts to help differentiate it from the original style Wayfarer. In common with much of Harrington production there was a good deal of over-lap in switching from one style to another. The Mk 1 was only seen with wooden frame construction but after the change to Mk 2 (as defined by the changed frontal style) coaches built for the 1953 season home market progressively changed from wood to all aluminium construction.

At this time, Harrington were at a technical high point. The war years had given them good experience with aircraft type construction methods, particularly with regard to jig building. By 1948 export vehicles were being advertised as all metal, CKD construction. CKD (completely knocked down) was a conventional motor industry term where vehicles would be partly assembled and then exported in large component form for final construction "on site". Britain was desperate to export in the immediate war years and "Export of Die" was a well known phrase at the time. In fact the threat was real - car manufactures would not be allocated steel unless they could show significant exports. Fortunately for a firm like Harrington, the materials quota did not apply to aluminium. This was now in cheap and plentiful supply with demand for fighting aircraft suddenly reversed and hundreds lined up for scrap. 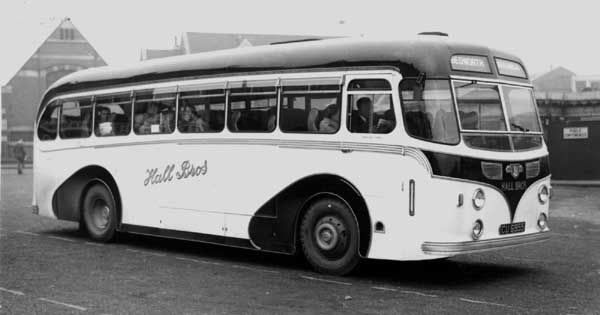 In 1952 Co-operation with one prestige customer, British Overseas Aircraft Corporation was continued with a rather extravagant project. This was the design of an integrally constructed vehicle which came to be known as the Harrington Contender. This was an accumulation of the knowledge applied to the all metal export bodies. Although the Contender was never produced in large quantities, at this point the factory and all products were now gradually turned over to metal construction as the prime system. Having said this, a number of the Mk 2 style were certainly produced with wooden framing but this appears to be only when half drop side windows were required in the customer's specification.

Although it had been possible to order an export type body for use in the UK, alloy framed coaches for the Wayfarer (a typically British style) were introduced at the 1952 Commercial Motor Show. They looked very similar to the Mark 1 but under the skin it was a very different vehicle. Pictured above is body number 1359 delivered in 1954 to Hall Brothers of South Shields - one of Harrington's more distant regular customers. One subtle change from the Mk1 was that for most early Mk2 production the body pillars were vertical and not inclined back at 10 degrees - though (as usual) this should not be taken to apply in all cases.

It is interesting to speculate how much Harrington's decision to change to all metal construction was influenced by the pending introduction of the AEC Reliance and Leyland Tiger Cub chassis. Certainly "weight" was on everyone's lips in the coaching industry and it is possible that the change was merely Harrington working on that problem. However the new chassis were certainly likely to flex more than the old ones so strength was certainly an issue too.

Substantial aluminium beams were laid across the chassis to provide the basis for the body (Harrington always used a sort of "sub chassis" across the top of the real chassis) and half inch plywood formed the floor. The aluminium frame was a "top hat section" fastened to the horizontals with triangular brackets. These vertical frames were cold riveted to a 14 gauge interior panel (stress panel is rather too strong a word, but the mark 1 had used only hardboard for its interior panels) and the exterior panels were pop riveted to the outside rather than screwed. This made a section certainly very strong in compression.

Attractive though the big chrome framed windscreens of the Wayfarer Mk1 may have been, they soon proved to be something of a liability. Unlike previous models, the Wayfarer did not have a bulkhead to strengthen the front of the body. Front engined chassis such as the Leyland PS2 had, even on the full fronted bodies, a half height bulkhead behind the engine, usually supplied by the chassis manufacturer. This contributed a great deal to the strength of the body and prevented it from lozenging, or going out of square, side to side. The new generation of underfloor chassis were supplied without any "tin ware". Lacking this important feature (Harrington were not alone with this problem) and without the benefit of modern sealants, the Wayfarer Mk1 windscreens soon leaked terribly where the frames were screwed into the wooden body. Therefore the Mark 2 had a different windscreen arrangement and this is the most obvious external clue to the change from Wayfarer Mk1 to Wayfarer Mk2. The main screen was divided up into four parts - not the most attractive of assemblies but the important feature was that the frame now contributed significantly to the strength of the front of the vehicle. The corner windows were now in one complete curve and mounted in rubber seals supplied by Glazetite. Again this was a possibly a visually retrograde step, but it meant that any slight movement of the body did not impose stresses on the toughened glass which had led to leaks or even breakage on the Mk1. 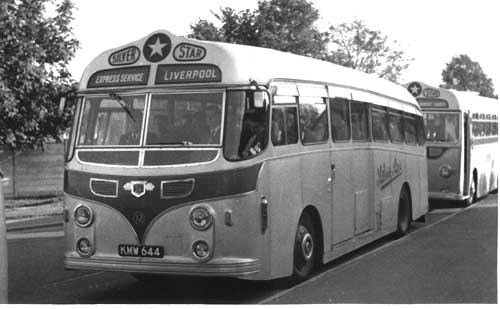 Body 1357 for Silver Star carries the special order front dome and pre dates the two well known Tiger Cubs that are in preservation. It differs from the two preserved coaches because it has vertical pillar frames.

Another obvious visual difference for the Mk 2 was that the flared out bottom to the side panels and separate wing covers was abandoned. By special order, these had been left off the variant of the Wayfarer 1 delivered to Southdown earlier in 1952. This was a portent of things to come. The wheel arches and the length of the bottom edge of the coach was now finished off with a small aluminium trim section.

Just to prove there's always an exception - body number 1228 was a Leyland Tiger Cub demonstrator with Ewer Group in September 1953 and despite having all the recognisable features of the light build body, still had the older style wheel arch. This vehicle was still pictured in Leyland catalogues into the 1960s. 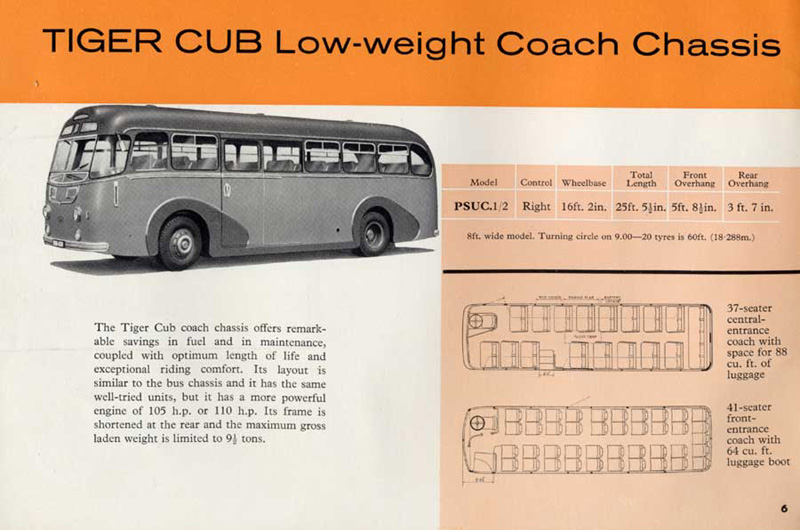 The Harrington Contender had been introduced at the 1952 Commercial Motor Show, at the same time as the Wayfarer Mk2. Initially the Contender range was essentially a dual purpose vehicle (i.e. a deluxe bus) and there seems to have been some attempt to make this style available on a conventional chassis. This led to a few examples of the Wayfarer 2 which were significantly different from all the others. Body 1142, registered PKE 272 was built for Maidstone and District on a Leyland Tiger chassis. This was almost pure Contender with a dead straight waist rail and featured the angular "Continental" front. It was the only one of its type and when almost exactly a year later another 14 Leyland Royal Tigers were bodied, they had the conventional Wayfarer front. By the standards of the time, the waist rail was still relatively straight but had a very subtle dip at the very last window bay. NYN 450 (above) was the only other example of the straight waistrail design.

With regard to ventilation, the coaching world was not quite ready for an end to winding down side windows (despite the tendency for passengers to play with them - convention was to remove all the handles and give one to the driver who would adjust the window on request) but barely a year had passed before rubber mounted windows with top sliders became the norm. The Mark 2 had also seen the end of the stepped waist rail (again) but it did occasionally reappear, usually to special order when winding windows were requested. The full length sliding sunroof was still available but more usual were new "Quick thro" lifting vents which, with variation, would become a common fitting for all coach builders in the coming years. These tended to be relatively small, so three were fitted and glazed with glass. 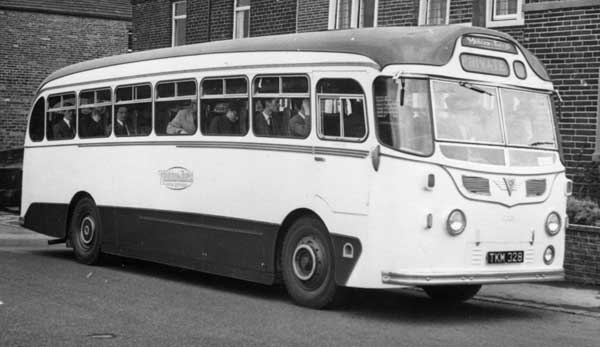 When originally introduced in 1952 the Mk2 body frames were vertical (which was different from the Mk1) but when the Harrington Contender Mk3 was introduced in 1954 the Wayfarer was also changed so that the frames leaned backwards at 10 degrees to give a more streamlined look.

TKM 328 with body number 1479 represents the near final development of the Wayfarer Mk 2 design.

The last of the Wayfarer Mk2 bodies were delivered in July 1955. The third from last was body, 1647 delivered to Gliderways (another faithful customer). It shows that it was still possible to order wind down windows. The windows and the use of strapping over the panel joints would suggest that this was a wooden framed version of the Mk 2. The appearance of the side of the coach is quite dated. 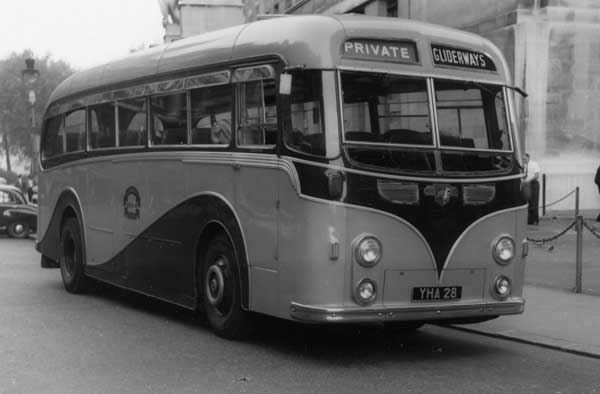 Three Wayfarer Mk2 bodies survive in preservation. Details can be found on the preserved vehicle page.