The development of the Wayfarer range was influenced by the Contender integral coaches, and the Contender Mk IV of September 1954 was the forerunner of the Wayfarer Mk 3 which started production during 1955. It was completely different to the preceding Mk2 model and Harrington would have been justified in changing the model name. However this was not their style, unlike Duple who could conjure up a new model title as a result of a change in exterior trim! 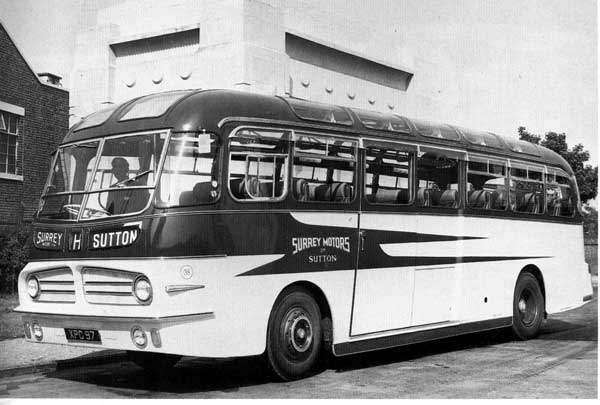 All the coaches produced in this style were metal framed. Unfortunately this version was Harrington's least popular Wayfarer design. Quite why is difficult to say. Perhaps it was too radical a change from the previous style. It was certainly a leap in the direction of modernity. By far the biggest customer was the George Ewer Group of London. Maidstone & District might be excused the fact that they did not buy even one since they had just taken delivery of 47 coaches to the Mk 2 design. One argument runs that they could have had the new style if they wished, but sought to avoid it.

In London, Ewer's Grey Green Coaches were nick named "Space Ships" and readers of the boy's comic, Eagle will readily understand this: both Dan Dare's space craft and the Wayfarer 3 appeared to have a mass of windows and generally had an uncanny similarity. The windscreen frames had been changed so that the glass area below the main windscreen was significantly larger. Most remarkably all four panes were made of curved glass (This might have put off some operators who would have been very aware of the increased cost of repair in the event of breakage). Most Mk3 were made with windows in front dome and roof cant panels. None were ever made with the Harrington fin (Now that would have been a space ship). The rear dome featured corner windows and a central window panel now reshaped to blend rather more successfully with the corners. In terms of construction the Mk3 was the same as its predecessor - all aluminium. The most significant feature was the new grille arrangement on the front panel. It was a dummy of course because the radiator was actually situated behind the front axle. The bumper trim was raised up from the bottom of the panel and this tended to reduce the droopy look which seemed to afflict all early underfloor engine body designs, regardless of manufacturer. The sliding door had now settled down to a standard position on both the Contender and Wayfarer and was not actually true centre entrance. The descreet advantage of this was that it was now easier to space out the seats according to whether 41 or 37 seats was specified by the customer. One unusual feature was the mounting of the rear lights in small 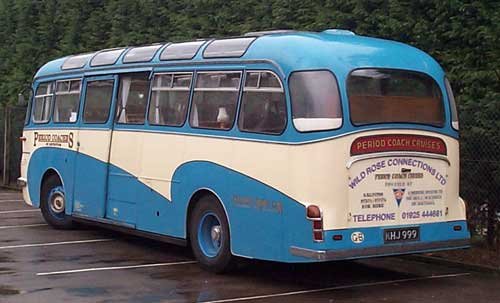 vestigial fins low down by the rear bumper. This was of course a nod towards the styling fashion appearing in automobile styling. Several coachbuilders tried it - with varying amounts of success. The chromed frames were hand made by Harrington. Only the first models had them and it was not specified on any of the Ewer vehicles. For all its eccentricities, the Mk3 was a much more standardised design than its predecessors and apart from the option of roof windows (and those rear lights) there were no changes to the panels throughout its admittedly short run. As stated previously, the Wayfarer Mk3 was not sold in large quantities and the earlier Mk2 continued to be ordered as well, until mid 1955.
Photo: Martin Johnston

Given that so few were made it is fortunate that one example of this design has survived to preservation. Further photographs of KHJ 999 can be accessed from the preserved list page. The paint scheme shown in the photograph was applied in the 1980s when the coach carried a class VI and was used for heritage excursions. When new it carried the same futuristic paint scheme as the coach at the top of the page. A Contender integral in the same style is also preserved.