There was a bit of a gap between the Wayfarer Mk3 and the Mk 4. The Mk3 disappeared when the factory became very busy with a very large order of Bedford A3LZG for the Royal Air Force. The first Mk4 appeared in time for the 1956 Commercial motor show. Evidently there had been a bit of a rethink about model types and at the show the latest manifestation of the Contender integral coach and a body for light weight chassis (i.e. Commer Avenger) all appeared at the same time. All had the same appearance and all were called Mk4. In fact there had already been a Mark IV Contender so fortunately the difference was indicated by a suffix for each version: the light weight was described as "the Mark IV C body" then the Contender IV B and with a clue that the "Wayfarer" name was on the way out, the standard under floor engine body was identified as simply the Mk IV A.

The Mk 4 appeared to have met with general approval. Maidstone & District took large batches, the last even after Cavalier production had started. In general, deliveries were no longer dribbling out in ones and twos, but customers old and new were buying fleets of ten or more. Furthermore they were not "local sales". North Western, East Yorkshire, Western Welsh were all attracted to the MkIV. 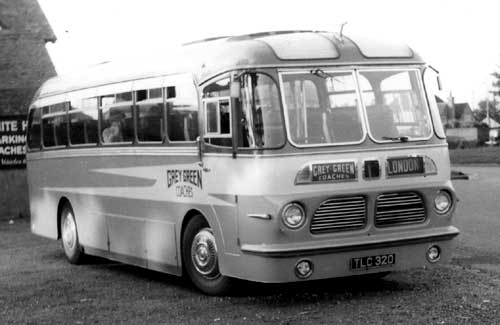 The very first, body 1909, on a Leyland Tiger Cub chassis was delivered to Grey Green and registered TLC 320. Due to the Suez crisis the rest of the order for 20 was cancelled and then picked up again later in the production run.

The frontal appearance was simplified, with only two large windscreens rather than the fussy multi pane of the previous model. The curved glass for the main screens had been discontinued. Legislation still required that the driver's windscreen should hinge open and coaches and buses of all makes suffered many breakages as drivers tried to open their screens without properly unfastening them. At least flat glass meant replacement was relatively cheap and easy.

The first five coaches had a centre entrance. This may have been so that the range was common with the lightweight Mark IV C body where a front entrance was not possible. However after the first five bodies the "front entrance" made an appearance. This was not the first time Harrington had tried such a thing: some of the Contender models (with Mk 2 Wayfarer styling) had this when Maidstone & District were experimenting with one man operation in 1955.

The roof dome was made of fibre glass and at the back edge, almost out of sight was a feature where the dome was stepped to incorporate a row of ventilation intakes. Inside the air flow could be controlled by adjustable chrome grilles. This particular roof feature was to continue into the Cavalier range and funnily enough even appeared on the Duple Dominant - made long after Harringtons had ceased trading. The complete front panel was also constructed in fibre glass. The large dummy grill was continued but re-shaped so that the head lamps were now outside it's boundary.

At the back an attractive stainless steel panel wrapped around under three windows which were slightly shallower than on the Mark 3. This hid the join where the complete fibre glass dome met aluminium at the waist rail. The Mark 4 was the last Harrington design to be available with the option of the Dorsal fin. It is believed the last one was fitted to body 2310 in August 1960. This was for Silver Star of Salisbury and registered WAM 441.

On the interior of the coach were at least two significant new ideas. One was the introduction of "Formica" plastic laminate which (as an option) was used all over the the dash panels and around all the passenger window surrounds. The other was the the use of aluminium sections which as part of the floor support and the side seat fastening, allowed the seats to be set at different spacings by simply slackening the securing bolts and sliding the seats along as required. This simple system, still in common use today, allowed coach seats to be adjusted for maximum capacity or even removed for touring, in minutes. 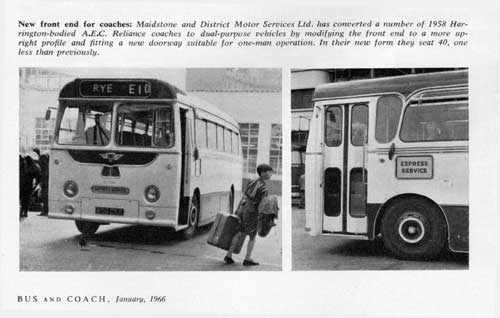 The M&D fleet was so numerous that a number were returned to the factory and the fronts were rebuilt in bus style for continued service. One of these exists in preservation, body number 2024 registered 390 DKK. When first built, this had been exhibited on the Harrington stand at the 1958 commercial motor show.